I presented a paper at alt.chi 2013 on my ideas for interaction in motion. Alt.chi is a special venue at the biggest conference in human computer interaction research (ACM SIGCHI Conference on Human Factors in Computing Systems), which solicits papers which challenge the conventional approach of HCI, so the paper essentially takes quite an abrasive approach and suggests that basically no current mobile systems are designed to be used while actually mobile.

As an example, I described the challenges of interaction in relation to the development of interacti.ve systems for use while swimming in cold water.

It is really a position paper describing how hard it is to do truly mobile interaction, but not offering any solutions as such.

In the presentation, I demonstrated the various challenges of cold swimming interaction by subjecting myself to them whilst presenting the talk. As I couldn’t get a large pool of cold water organised, I used gaffa tape in order to simulate the various ways in which it makes it hard to interact, for example by taping up my hands to simulate the way that getting extremely cold hands forces them into a claw shape. Towards the end of the talk, I taped my mouth up to simulate how it is hard to talk whilst swimming, and a pre-recorded voiceover played for the last bit, during which I pretty much taped my whole body to a table - as you can just about see in the grainy twitter pic below. 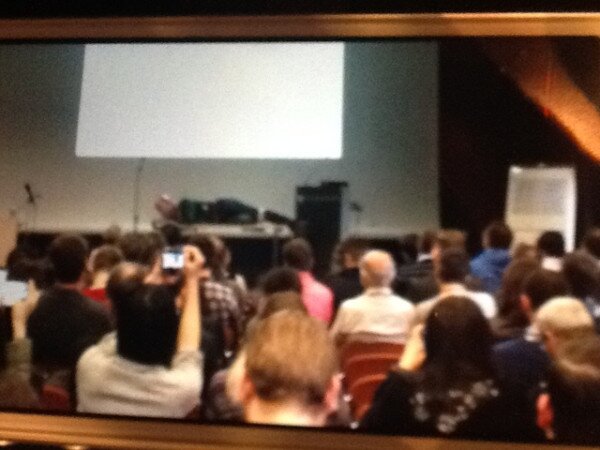